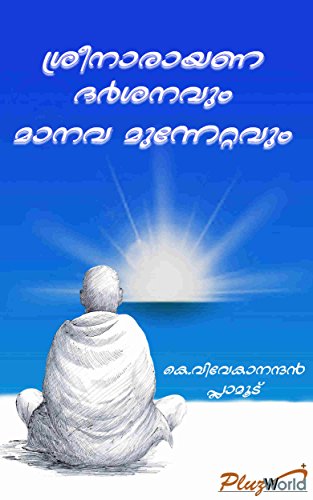 This is not a biography of Sri Narayana Guru. The Author has aptly summarized the theme of this book in one sentence:
“The Guru I have seen and the Guru I have understood are entirely different”.
The present generation just consider him as a God and never attempt to go deep to understand his teachings. The importance of his teachings and the implementation - following or putting them into practice - will surely change a person’s attitude towards everything in life. This will make life more meaningful and worth living. An urge to live in full harmony with all - irrespective of caste, creed and religion – and with nature will arise automatically. Universal love and brotherhood will prevail in their minds and in the society. It helps one to understand that all religions are same and only the path each one follows is different. Quarrelling within and with other religion will become irrelevant and religious harmony will prevail. Guru has taken the advaitha philosophy, which teaches the ‘oneness of god under Hinduism’, further ahead and brought all religions under it. To understand Guru properly one must get a good understanding of the socio, economic conditions that prevailed before and during his time. Such a study will make one understand how the real inhabitants of Kerala - who were socially, economically and educationally well progressed at that time - were destroyed by depriving many privileges including education and forced them to live as lower classes with no dignity. Then the importance of Sri Narayana Guru and how he helped the upliftment of the downtrodden will surface automatically. This book is an attempt to reveal the greatness of Sri Narayana Guru as a universal teacher and reformer. All Guru’s teachings are relevant even today. Though untouchability has been eradicated by rule, even today many cling to chaturvarnya - caste system - and divide and treat them and others as upper and lower classes. The upper class and lower class both did not want this caste system to disappear. Upper class cling to this to show their imaginary superiority and lower class stick to it to continue to receive reservations and other benefits.
What Gurudevan has taught and shown through his life is not fully understood and did not get a universal audience and acceptance. He was just narrowed down either as an Ezhava saint or as a God’s Incarnation. Guru had never done anything intended only for the Ezhava community. He wanted the benefits to reach all belonging to various lower classes. He had lived among them, understood properly the life and conditions and sufferings of them and found out the real cause of their miserable conditions. He then started providing them with what the upper class had denied them for years, starting with the temple entry. He freed them from many superstitions and customs and put an end to many crude forms of worship. The process of educating them continued by obtaining entry to schools, first for men and then for women. Guru had used the Advaitha philosophy to remove caste differences and focused on personal hygiene and education for social equality. He also aimed at attaining economic progress for the lower community. If one studies the life and teachings of the Guru chronologically in contest with the social life that prevailed in Kerala, one can see how systematic were Guru’s plan of actions. He never revolted publicly against the upper classes but lead a silent revolution that shook the fort, made by the upper classes for their protection, and reduced it to ashes and made them stoop to the true inhabitants of Kerala.
This book is a study of Gurudevan’s and others plan of actions in contest with the socio, economic and educational condition of the people in Kerala during that period. It also explains how they succeeded in bringing back the bygone glory and dignity of the Ezhava community which in turn ignited various nationwide revolts and struggles for the betterment of the lower classes.