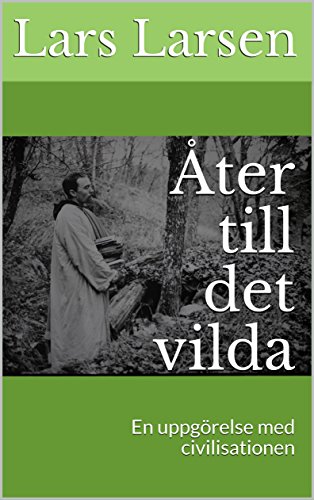 In this book Lars Larsen (b.1984), a norwegian-swedish ecophilosopher, settles radically with civilization, and offers an alternative way to go for humanity; back to nature, back to harmony with our animal self, back to being an animal among other animals. This he calls "animalism" ("djurism"). If we don´t do this, we risk the future of humanity, and might go extint already during this century. But with a radical moral awakening, we can avoid this, and build a bridge back to nature, with permaculture and forest gardening. The book has also a strong sense of the suffering of the poor, especially in the third world, and weaves together environmental ethics with human ethics. It also offers a plan for how to go back to nature, in a long essay in the middle of the book. A global plan, an idéa for UN-politicians who really care. It´s not a perfect solution that all must accept, it´s only an attempt to show that it´s practically possible to save the planet and go back to nature, if we begin now.

The book has its eyes on two main threats to humanity and the planet; Peak Oil and Climate Change. The first might hurt humanity but is good for the rest of the planet. The last is bad for all. The book takes these threats really seriously, and it can only be understood in their context.

The text in the book is built from a series of blogposts on Lars Larsens blog on www.universalist.blogg.se, during 2015 and 2016. The blog can still be visited and read. The language is swedish.

Lars writes in the spirit of anarchoprimitivistic philosophers like John Zerzan and Derrick Jensen, and draw conclusions from their thinking which they themselves maybe haven´t done.

Lars was born 1984 in Finland, with norwegian parents. He has studied two years theology at Åbo Akademi University, Finland, and has 2010 published a ecotheological book in Swedish, called "Animalistic theology. The return of paradise" (Djurisk teologi. Paradisets återkomst). He became atheist 2014, and his newest book is in a non-religious spirit. His animalism has its roots in ecotheology, but the core of it has survived his becoming an atheist, namely that humans are animals and ought to live accordingly, in harmony with this fact.